Here's us dressed up as the Easter bunny: 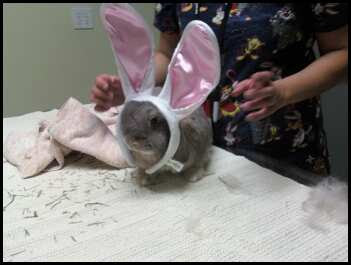 Actually, we just went to the vet on Halloween this year, and the vet tech was wearing bun ears as her costume and insisted we try them on to see what we would look like as up-ears buns. She also kept calling Mom's boyfriend "Dad" (at this point they had been seeing each other for about six weeks), but he was a good sport about it. 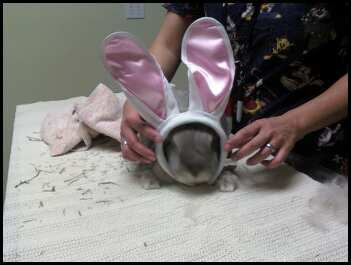 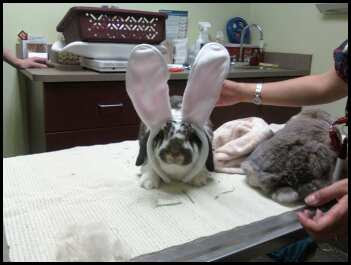 Easter means we have to go to the house where Mom grew up and stay with Mima, Pops, and our Aunts Katie and Allecia. Here's who else we need to contend with while we're there: 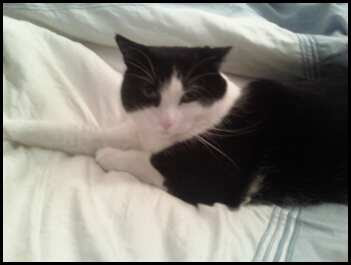 Mean Old Cat aka Bella- Bella is not a very nice cat to the two-foots, or to Maddie, or to other cats, but she's been OK with us for some strange reason. She never comes upstairs, which is where we stay while we're there. She was introduced to Biffy outside on the deck once, and they touched noses and that was it. Still, we stay out of her space, she stays out of ours. 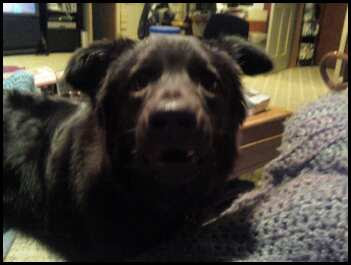 Big Scary Dog aka Maddie: The big scary dog actually isn't mean at all but we're scared to death of her. She's big and smells funny and makes a whole lot of noise. One time Maddie also met Biff out on the deck, and Maddie tried to get too close and Biff ran and Maddie thought it was a game and gave chase. Biff immediately ran under a table and started thumping repeatedly for about 10 minutes (I don't think I've heard him thump before or since). She also came in to our room once where we were safely in a pen and tried to smell us through the bars, and Sogna the fearful little girl gladly touched noses with her, so maybe she's not all bad. Aunt Katie says she just wants to be friends with us, but quite frankly we just don't care to find out.
PS. Mom and her boyfriend went out last night to a concert, and the opening band was called BIFFY CLYRO!!!!! Who's ever heard of ANOTHER Biffy?! Mom said they were a pretty sick band as well.
Posted by Lisa at 11:11 AM