Make Mine Chocolate... Or Moss!

I don't think I need to explain the meaning of "Make Mine Chocolate" to anyone who reads this blog. Nor do I need to enumerate the dangers of buying rabbits for Easter. And the need to educate anyone you can about those dangers.
I am a big supporter of "Make Mine Chocolate," even having bought an Easter bunny myself 3 years ago.
But what about "Make Mine Moss"?
I got this in the mail from Jon's parents today. Isn't he cute? It's a little moss-covered bunny with an Ivy plant growing around him. 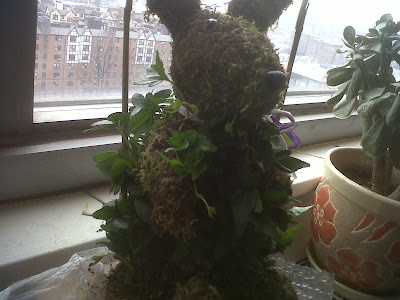 (Yeah, I know my jade plant looks badly. I'm not happy about that.) 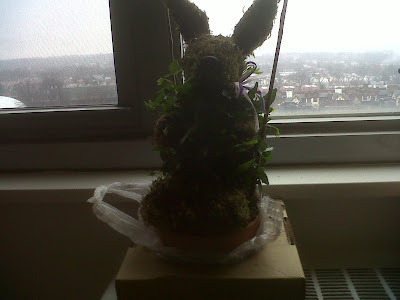 Isn't he cute! He needs a name. He did come in a nice little terra cotta pot but I wanted to keep him in the plastic to minimize leakage and with the box holding him upright.
I checked the toxic houseplant list right away, (http://www.adoptarabbit.com/articles/toxic.html), and Ivy IS toxic to rabbits, so this little rabbit was moved into the bedroom.
I hope I don't kill him!
Posted by Lisa at 7:18 PM 9 comments:

Vet Kitty Says: "Your Blood Test Was Positive... for Apples" 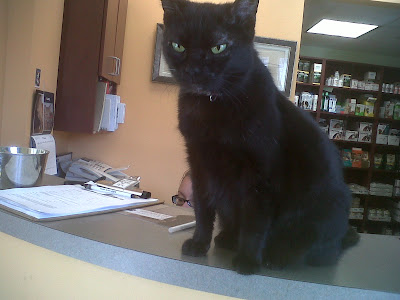 Ok, so it's kind of a running joke about the apples. We've discovered the bunnies LOVE apple. Love might not be a strong enough word. I think junkie is a more appropriate word, and the bunnies exhibit what's similar to a junkie's drug seeking behavior. Once they have a taste, they're checking every corner of the apartment for more, and Biffy will bite at my ankles thinking that will get him some more. (It doesn't. I cut the apples into eighths, and then cut each eighth into four - so, 32nds? - and they can have one of those each morning).
First of all, thank you all so much for all of your reassuring words of support. It's so wonderful to have this little virtual community of bunny people to turn to in times of need. I value you all more than you know.
It went well at the vet on Saturday. When we got there, there was a big green bird loose behind the reception desk! Maybe an eclectus? Then, when they took Jon and the bunnies into the exam room while I was in the human litterbox, Jon said a ferret ran into the room to check out our family and make sure we could stay!
The vet said that whatever the problem had been with Sogna's eye, it seems to have resolved itself. She gave me some eyedrops to keep around in case we run into a problem at a later date.
She also suggested we follow up on Sogna's bloodwork. I think that I mentioned that we took a blood test when we were there for our annual visit in May. What most of you didn't know is that Sogna's came out abnormal. Her liver values were slightly elevated. At the time, the vet assured me that she has seen those values before, and that she's never seen them become a problem. She said those values are very slightly out of the normal range, and 3x those values would be cause for concern. Based on what she told me, and some research I did, it seems that many of the elements of neglect can affect a rabbit's liver, including unsanitary condition, improper feeding, malnutrition, and infection (each of which poor Sogna experienced before she was rescued). Of course, being the way I am, I asked her what we should do about it. She said, we'll just follow up with another test the next time I bring the bunnies in. If the values weren't decreasing, (which she suspected they would be), then we would start thinking about further testing at that point.
So on Saturday, we took another blood test, since we were there, to re-test Sogna's liver values. I got a voicemail from the vet yesterday morning, letting me know that the results were back, and that everything looks "Fabulous"!!! So we were thrilled and everybunny got an extra carrot last night. 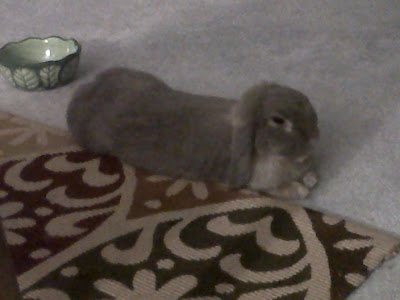 Sogna says, "Look at me! How could anybun be more OK than I?"

So, after the blood test and eyedrops, we went back to the front to pay. Vet kitty, also pictured above, came running across the receptionist's keyboard to greet me!! The receptionist said vet kitty just craves attention desperately. I couldn't stop petting her and she couldn't stop purring. I didn't get the greatest pictures, but she was super cute, wagging her tail so hard that it was slapping on the front of the receptionist's counter, and laying across the counter, hugging it, so happy to have a new person around to pet her. 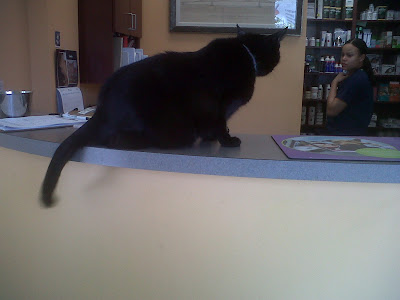 Vet Kitty, supervising her staff. Note the tail.
On an unrelated note, I had intended to include the pictures below in my post about gifts, but thought I lost the pictures. Granted, I self-gifted these to myself as an end-of-semester/Christmas/New Years gift. They're from The Qi Papers skreened shop, which you can find at http://skreened.com/qipapers. D. Moll is really an incredible artist, and now you can wear her prints! 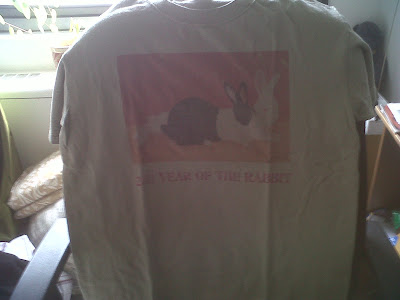 The light is terrible in this picture. It's the dutch and white bunnies from D. Moll's "Two from Nottingham" print, and it says "2011: Year of the Rabbit" beneath the picture. Of course one needs a t-shirt to celebrate the Year of the Rabbit! And I love the color of this one, it's a sage green, but you can get these t-shirts in just about any color under the sun. 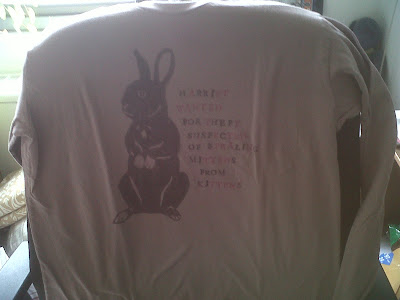 Again, the light is terrible in this picture, but this long-sleeved t-shirt is a really nice soft eggplant purply color. It's amazingly soft organic cotton. It's D. Moll's Moku Hanga print depicting Harriet, everyone's favorite mittened bun, and next to the print it says: "Harriet Wanted for Theft Suspected of Stealing Mittens from Kittens."
OK. That's enough advertising. Go check it out for yourself!
Everybun be well.
Posted by Lisa at 11:30 AM 11 comments:

Update: (or Sorry for the Lack Thereof)

I was hoping to do a more official post, but we went to the vet on Saturday and you haven't heard anything from me, and that's kind of not cool. So, I just wanted to let you know, everybunny's FINE.
Siamo tutto bene!
Legitimate post is forthcoming (I hope).
Posted by Lisa at 12:38 PM 9 comments:

Last night I noticed it looked like Sogna's eye was running. All down her cheek. I picked her up to try to show Jon, and when I tried to touch it to feel the consistency, she freaked out. "Maybe it's just because she doesn't like being held."
Thinking I was panicking over nothing, I decided to leave her be over night, and see how it looked in the morning, thinking, maybe Biffy just licked her eye when his mouth was still wet from the greens.
After a pretty sleepless night for me, her eye looked just the same in the morning. I was petting her, and tried to touch it again. She jerked her head away and ran, but I got to feel it: Hard and dry.
I'm not sure if she's jerking her head away because it's sensitive, or because she doesn't like being touched there. Could be either or both.
We're going to the vet Saturday afternoon. Please keep all paws crossed it's not an abscess. My little angel girl does not deserve that after all she's been through and how strong she's been. And after the tremendous recovery she's made in the past two years.
That's all for now. Everyone and everybun try to stay well.
Posted by Lisa at 10:35 AM 11 comments:

Sorry I've been absent for quite awhile! I've had a lot going on. Finals in 6 weeks? Really??
I'm ashamed that I waited so long to blog this one, but I recently(kind of!) won the February giveaway over at the Lavender Rabbits!!! YAY!!! I was so excited to receive my beautiful gift.
(picture removed)

Another super cute bunny stamp on the reverse of the package, and another giftie for Biff and Sogna!!! I've actually bought these exact cookies from Bunny Bytes before, and they're a big favorite among my buns! If you haven't shopped at the Bunny Bytes online store before, check it out. They have some great handmade toys, often creative variations on Busy Bunny products, always tested and approved by their own four bunnies before hitting the store. They have an awesome treats selection too, a variety of hay, and they are careful to only sell high-quality, safe, bunny products. 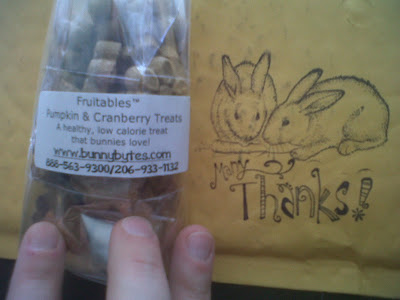 No, many thanks to YOU, Donna and Ed!
And now... here she is!!! The Lovely Luna LoveBun! Isn't she gorgeous?! 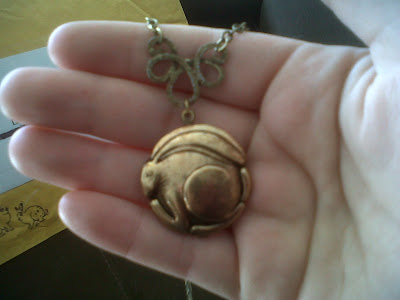 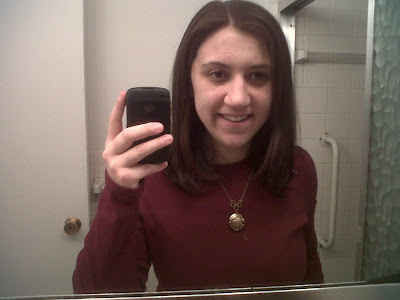 Thought I would model Luna for you. Isn't she beautful?!
THANK YOU THANK YOU THANK YOU Donna and Ed!!! I absolutely love her and am so lucky to give her a great home.
Check out Donna's blog at http://lavenderrabbitstudio.blogspot.com/, and if you'd like some beautiful, handmade rabbit (or non-rabbit) jewelry of your own, check out here etsy at http://www.etsy.com/shop/lavenderrabbit?utm_source=CraftCult&utm_medium=api&utm_campaign=api.
In other relevant gift news, I asked my mom for a new pair of the Disapproving Rabbits sneakers, since Jon spilled mustard on my old ones. Apparently she perused Zazzle for all kinds of bunny gifts, and look what she found! 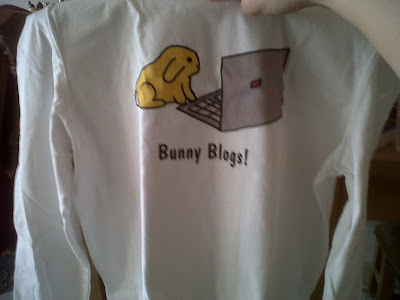 How cool is this?! It's like a little Yellow Sogna blogging away on her own.
One more random note:
For several reasons, none of which are important, they decided to move us to a different floor at work. Unfortunately for me, one of the offices we were given was an interior office with no windows, and since I'm the lowest man on the totem pole, I was moved to the windowless cell. I felt pretty sentimental about leaving my office, since it's the first private office I've ever had. So, on Friday night, before I left work, I decided to say goodbye to my beautiful view of the west side of Midtown Manhattan and the Hudson River. 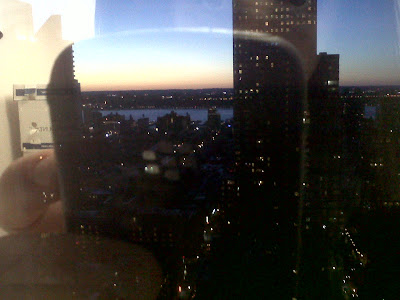 Might it be a great picture if there wasn't the reflection of my phone and the boxes of documents in my office?
We did a nail trimming this morning. Wish me luck keeping Biffy out of stasis!
Everyone have a great week.
Posted by Lisa at 11:39 AM 12 comments: