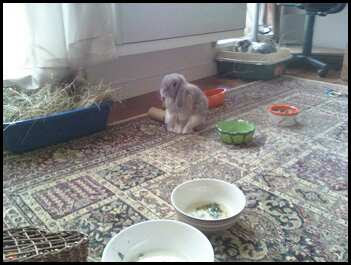 Hi Mom, where ya been?? -Sogna, sitting like a wild hare.
I just got back from five days in Vegas. Came home to an apartment that was pretty thoroughly trashed. Bedroom was covered in fur and doots. And the bed, of course, was also covered with doots and soaked with urine (good thing I've been covering it with a thick plastic sheet over two layers of nylon tablecloth material). 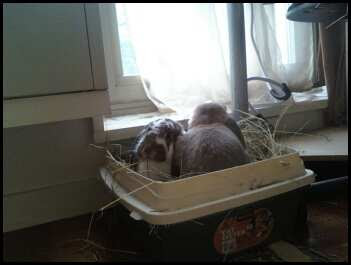 See, we know HOW to use the litter box, we just choose not to when we're angry.
Still, I was thrilled to see my sweet babies, who I'd missed like crazy all week. 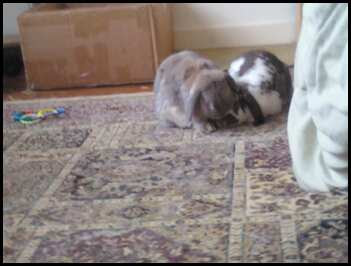 Things are about to get pretty crazy around here (even crazier than usual). As soon as I get over the jet lag, I will commence a cleaning and packing frenzy. The gameplan is to move to the new place in two weeks. I will have no free weekend for cleaning/packing activities, since this weekend I was recovering (though I cleaned a little), and next weekend I have my cousin's engagement party and then bridesmaids' dress shopping on Sunday (can anyone explain WHY we would buy dresses a year before the wedding? I can almost promise it won't fit by then).
After the move, things are going to get wacky, almost right away. One week to unpack before school starts. Since classes are 6:30-10:30 pm and Mom is still working, buns will have early breakfasts, VERY late dinners, and Mom hardly ever around. Things will get somewhat back to normal when Jon moves in and can be trained to serve dinner on time.
I leave you with some pics of the cutest little baby bunny EVER! 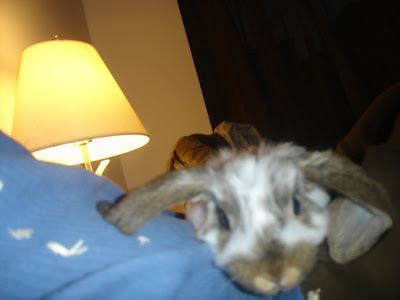 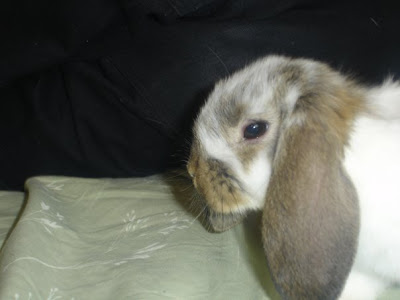 I've been meaning to post all week, but I've been really lethargic and haven't felt well. Have I mentioned that I hate pharmaceuticals?
Anyway. Happy 4th of July!!! 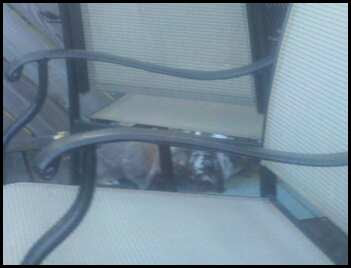 My poor bunnies got dragged out to my parents' house on Friday night. I was too worried about the fireworks to leave them in the city all alone.
Saturday evening, when it started to cool off, I took the buns out on the deck for some exercise. I don't know how much they really like it out there, but I didn't want them in their pen for three days straight. 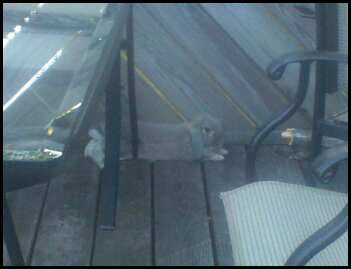 Little did they know...
Little did Sogna know at the time this picture was taken that she would soon be licked by a Big Scary Dog.
Maddie really is a very good dog, and a very smart dog. But she has some telling nicknames. "The Mayor." "Inspector." and "Policedog." She just needs to inspect everyone and everything that comes inside, or even near, her home and her family. 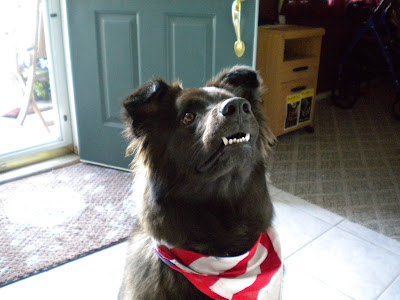 Maddie is always trying to get near the buns. If I open the door to my room for her, she sits obediently and looks at them longingly. (She knows she's not allowed in). But they're terrified of her. As a guard dog, she's pretty noisy, and she doesn't understand a bunny's value of personal space.
When I carried Biffy inside, I stopped in the kitchen so my family could sat hi. Maddie sat down at my feet. So I let her smell him. She buried her nose in his fur, just trying to get a good sniff.
Then, when I brought Sogna in, I did the same. Sogna is slightly less afraid of Maddie. Maddie started licking her!! I don't know if Sogna liked it, she probably didn't so I whisked her away.
Maddie loves her family very much. I think she knows that Biff and Sogna are my family, and thus hers too. And she can't understand why she isn't allowed to get to know part of her family. After she was allowed to get a good look and sniff, she didn't bother the buns. She didn't try to follow me upstairs to put them away. I think she was satisfied.
Sunday we had a party to celebrate the 4th of July and my birthday. There were too many people around and it was just way too hot, so the buns had to stay in the air conditioning. They got plenty of chamomile and some fresh catnip to calm their nerves.
Then, Monday was my birthday, so we stayed a bit longer to have lunch with my family. We got on a fairly late train, to try to avoid some of the holiday train traffic. Turns out the trains were actually delayed up to 114 minutes, because of congestion from so many people getting on the train at each stop!!!
Finally, we made it home. Phew. It was a long and exhausting weekend, and the buns were happy to be home. 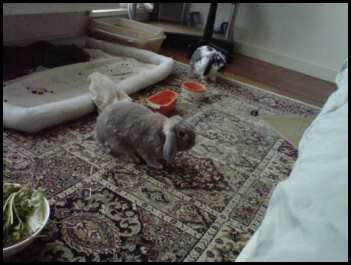 Pretty clear from this picture that the excessive shedding has barely slowed down. I pluck every day, and brush as often as I can actually CATCH the bunnies to brush them, but they just seem to keep shedding! It's been at least two months of ridiculously heavy shedding. I'm so tired of torturing the buns with plucking, brushing, and vacuuming. When will it end?!
That's all for now.
Have a great weekend everybunny!!!
Posted by Lisa at 8:44 PM 7 comments: