First I wanted to say thanks for all the comments on my last post, especially all of BL's friends who visited, most of whom I hadn't "met" yet.
The story actually reminds me in some strange way to my favorite speech from Plato's Symposium, given by the comedian Aristophanes. It's silly but really beautiful.
Here's the gist:he explains that at one time, all people had two heads, two sets of appendages, were basically like two people stuck together, but actually one individual. At one point, Zeus got angry, as he often did, and used his lightening bolts to split each individual in two. And so we are to spend our lives, searching for our other halves. And the wholeness that we experience when we find them is called "Love." 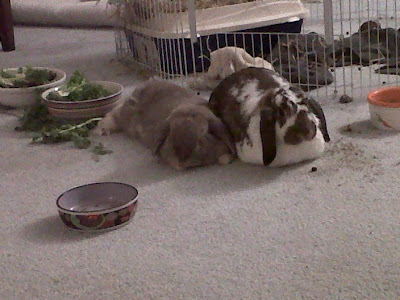 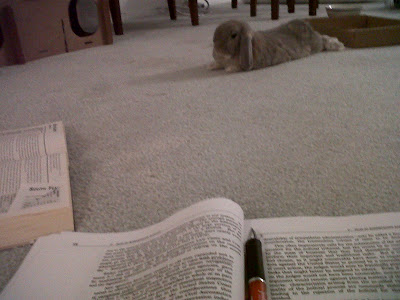 My study buddy.
I don't know how it's possible for me to be so far behind. School doesn't start until Monday, yet I have eight assignments that I have been "advised" to complete by then. I've completed one, almost done with the second. Ahhhh!!!
Buns still seem very happy in their big new apartment. Desperately trying to explore the bedroom, which is off limits, and I think Biff is in love with the bathroom, but I try not to let him in there because it's a little scary. I woke up this morning to find the dirty old toilet brush that the landlord so kindly left us in the doorway of the bathroom. Who put that there!
Oh and no PeeChair since Sunday or Monday, I can't remember, but that's a good thing!
Also, I found a website that has plastic wire cover in seven or eight different colors! I bought 100 ft of white plastic pre-slit tubing for $29!!! (White SHELL, White!!!!!) and it will be much less of an eye sore than the black stuff, especially against my white walls and carpet. Let me know if you want the website.
Someone's doots smell, any thoughts? Should I be worried?
OK, long weekend ahead. Wish me luck!!!
Posted by Lisa at 11:59 PM