One Good Thing About Music -- When it Hits, Ya Feel No Pain

(title is a Bob Marley quote)
Well, I must confess this is a very old post. I took these pictures while studying for finals fall semester, but never managed to get them into a post.
Another disclaimer: The empty bowl in the photos below is from the previous night's dinner. Nobun is starving. Breakfast gets a different bowl.
This may not seem so novel to some of you who have rabbits with very active ears (a certain west coast earometer comes to mind ;) )
I rarely listen to music without headphones because I'm afraid it'll scare the bunnies. But I figured, if a particularly loud song came on, or somebunny seemed scared, I'd just skip that song. (I always listen to my iPod on random. Always.)
I checked on Biffy, over in his usual spot for that part of the day, and his ears were doing something I've never seen before. The openings were facing all the way forward. 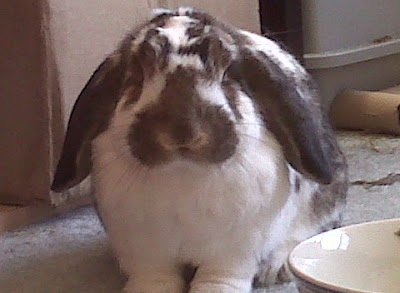 Groovin' Slowly- John Butler Trio
Is this Normal? I've never seen anything like it? 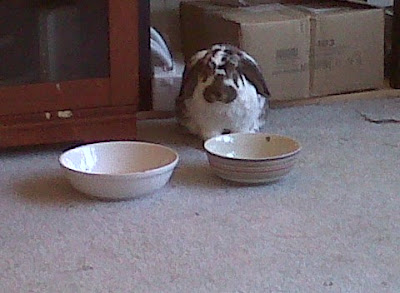 All Along the Watchtower - I have versions by three different musicians (can anyone guess who?) but this one happens to be the Hendrix version
Is Biffy a rockstar? 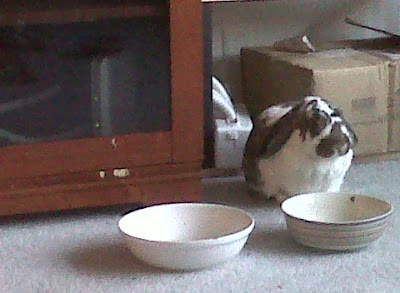 Concrete Jungle - Bob Marley
Does he love it, or is her terrified?
On a more disconcerting note: Biff and Sogna had a scuffle the other night after Jon and I got home (late) from spending the Super Bowl with my family. While I was petting Biff (unusual for that time of night), Sogna mounted him. It's unusual for Sogna to mount these days, but Biff mounts her at least once a day. We used to interfere but the vet told me not to, because she said interfering makes it worse. So you can imagine the effrontery endured when she mounted while I scratched his head.
A "ying-yang" chase ensued, but all the while Sogna maintained her grip on the fur on his back. Afterwards, I found a big bald spot on Biff's back. As you can imagine I was upset and taking a picture wasn't the first thing on my mind. The best way I can describe the size of the bald patch? You know at touristy places they have those machines that flatten out your penny and imprint a design on it? It's about the size of the flattened out penny. So pretty big.
I didn't separate them. There was no broken skin, and they were grooming each other later that night.
I'm distraught. They haven't fought since late May or Early June of 2009, several weeks after we first adopted the Sogna. Should I be so upset? I know it could be so much worse, but it's sad because I know they really do love each other. Should I separate them if it happens again? I feel terrible even thinking about it.
Does this look like the face of a killer to you?? 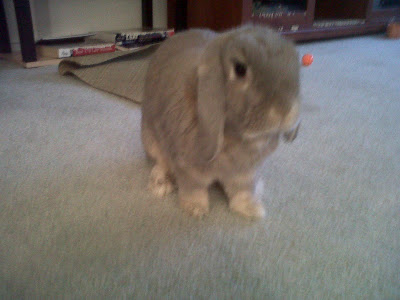 (Apologies for the blurriness. Sometimes she just doesn't like to sit still, although blurriness aside these tend to be the best pics of her!)
Watch out, she's dangerous!!! 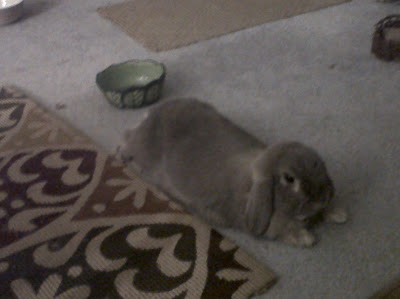