I walked in the door at about 12:45 a.m., after working two jobs and a total of 14 hours today.
I gobble down a slice of pizza and get the bunnies' nightly treat of one papaya tablet each as fast as I can, because I'm eager to get to bed and get a little sleep before work in the morning. Usually the buns hear the container from anywhere and come running before I even leave the kitchen.
Biff was waiting for it underfoot. When I sat down to give it to them, I realized Sogna wasn't climbing into my lap. So I gave a most anxious Biffy his, and went to bring the Sogna's treat to her, thinking she was probably hard at work in the litter box.
Still, it's not like Sogna to fail to come running to food immediately.
...and she wasn't in the litter box. 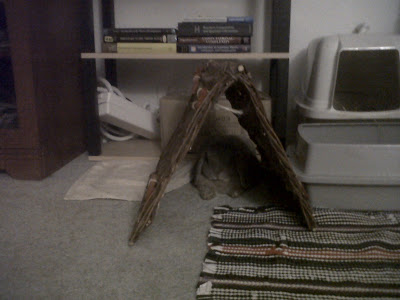 I found the Sogna camped out in her tent, and she wasn't leaving. I tried to give her her treat.
She refused.
What?!?!
I've always speculated that it's because of her year of starvation: Sogna does not refuse food. Ever. Until recently she wouldn't even take breaks eating dinner.
Couldn't coax her out.
Finally, I was scared enough to move the tent.
Chased her around the apartment to take her temperature.
Exactly 99 degrees Fahrenheit. Even after the "chase" should have warmed her. Sogna tends to run high. 103-104 is normal for her.
I should have known something was wrong by the way Biffy is acting. Completely out of sorts. Following me around like my shadow, attached to my ankle: "Mom! Help her!"
I gave her 1 cc of simethicone and approx 5 cc of lukewarm water. Also brushed her somewhat but she was becoming very stressed. Will start with critical care tomorrow if necessary, and I'm emailing the vet right now to find out how long Reglan will keep. If the stuff from October is still good I will give her some of that too.
I'm so exhausted I'm borderline incoherent. Is there anything I should be doing to contain this situation that I'm forgetting??? Should I turn off the air conditioner in the bunnies' room? Our AC is not on a thermostat, there is a unit with a low, medium, high dial. currently set on low which pretty much feels just like medium. It is somewhat chilly.
I have had one of the most difficult weeks at my day job that I have ever had. Too exhausted to think.
Posted by Lisa at 1:48 AM