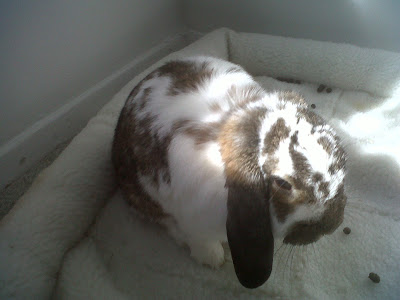 My sweet little boy didn't come out of his cave for breakfast yesterday.
I tried putting his food near him, because it's unusual for him not to run for breakfast, but he pushed it away. Tried giving him an Oxbow Papaya Tablet as a treat, but he didn't take it. Parsley, no.
At first I thought maybe he just wasn't hungry, breakfast was late and encroached on naptime. But he never refused food before. And he was still pooping like a champ.
So I went out, got a pineapple to juice, a feeding syringe, and a thermometer, and came back. He was hiding under the bathroom toilet and wouldn't come out.
When I picked him up, he didn't struggle at all. I held him for several minutes without a kick. This was definitely NOT my normal healthy boy.
His temp read 99.2. I thought, that couldn't be right. So I tested the thermometer on Sogna. 102.4. So, if anything, the thermometer was giving higher readings, not lower. (Although, at our last vet visit, they told me to keep an eye on Sogna because her temp was a little high, but she was perfectly healthy. So I think she probably just runs high.)
At this point, I panic. I have no medications whatsoever in the house, because the buns have never been sick before. At least not since Sogna was in foster care.
I called the vet, who closes at 5, at about 4:30. I explained the situation, and asked whether I should wait til the morning or come in now. They said, you could get simethicone and try to get him through the night, but, "you know with rabbits, they go fast." Ahhh. Ok, will you stay open for us? We're on our way.
I packed up the whole family (Jon to drive, me, the patient and Sogna for moral support), and headed to Brooklyn. The nearest vet is 20 min away. 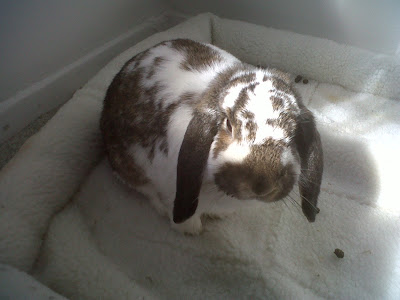 I'm not going anywhere.
We got there, and I tried to read the thermometer over the tech's shoulder. Looked like something in the 96's or 98's but I'm not sure. Definitely bloated in his upper GI tract, more towards his chest where I didn't think to look.
They checked his teeth to see if that was the problem, but they said his teeth looked perfectly normal. I guess his molars have somehow ground themselves down since our last visit.
So, not knowing the source, they gave him IV fluids and a Reglan injection. Sent me home with meds. Reglan and Simethicone 3x/day, critical care 4x/day, call us if it gets worse.
They said it was good that I recognized a problem, the fact that he was still pooping means that we caught it early before it got more serious. Man was it serious to me. 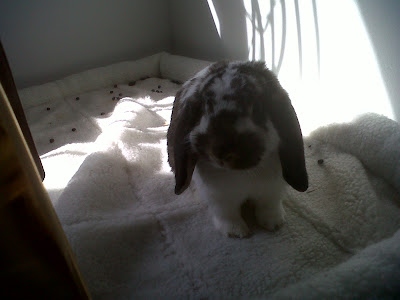 I'm calling the ASPCA
Biffington does NOT like to take his medication. The only thing that he doesn't seem to mind is the Reglan, I guess it's yummy. I guess part of the problem is that I have to hold him to feed him. And Biffers is NOT a bunny who likes to be picked up. He started eating last night, (not back to normal just yet), so hopefully we won't need to medicate him much longer and we can leave him alone.
So, he gets his meds and critical care, doesn't swallow them, and spends the remainder of the day cleaning the mess off of his fur, until next dose. 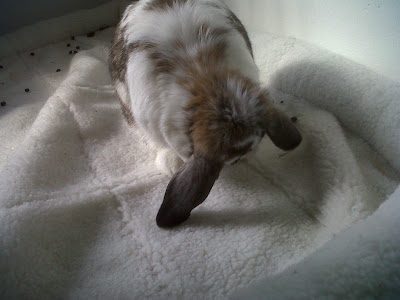 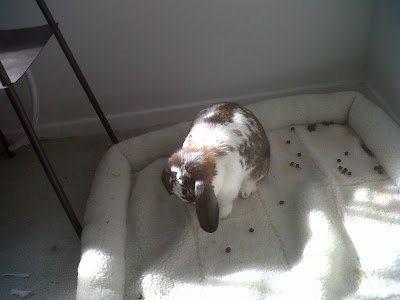 Biff is only 2 and a half, and has never been sick before. I know stasis can happen at any time for any reason. I guess I just thought I had more time to enjoy them being healthy.
Posted by Lisa at 10:59 AM