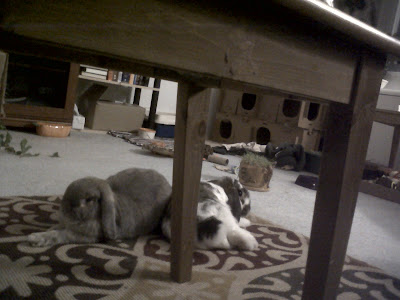 (Title may need some explanation. There's a fairly recent movie called "Everybody's Fine." I started watching it, and realized it's almost the same as an Italian movie called "Siamo Tutto Bene", which means, Everybody's Fine! Must be either a remake or based on the same book or something).
Anyway, i just wanted to check in and let everyone know that really, everybody's fine here!
There were some ups and downs and scariness, but Biffy is all better and we (I) stopped giving him his medication on Thursday. The last few days I used a towel and it helped a lot! I'm not so good at making a secure bunny burrito, but I tried and Biff seemed nice and distracted by taking out his aggression on the towel. He chewed the towel and I really think it helped keep him calm. At some points, he'd clamp down on the towel like a baby's binky. (Get it? Binky?)
He seems to be feeling fine, although from the medication dripping down, he has a big ol' mat right at the bottom of his whiskers and it might be bothering him, I'm not sure. I'm afraid to try to cut it out for him, though.
Sogna's good too, although right around the time of stasis they both started a massive shed. So, Sunday morning, I got the old pen, locked myself in it with Sogna, and the furminator, and the brush. I was in there an HOUR with her, and she's still shedding like a beast. But I let her go, because I think an hour was quite enough for her. Then repeated with Biffy, although I wasn't in there as long with him because he doesn't shed badly, and he was done when he was done for the most part.
So now, the buns are mostly back to their studies. Midterms are this week, and the first draft of their final paper is due Sunday. Ahhhhh!!!!! (Midterms don't count, nor does the first draft, but it's a whole heck of a lot of work and it just keeps increasing...) 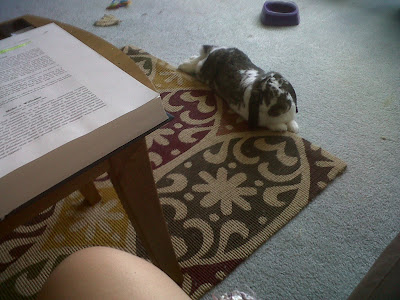