Happy New Year!!! We wish you a very peaceful and happy Year of the Rabbit.


Now to the story of the day. Biffy is somewhat in love with the bathroom. Here's an old pic of him just hanging out in the bathroom. Sometimes he lays across the door way, sometimes he stands guard just outside the door in the hallway. We frequently get our feet boxed for daring to use the toilet or brush our teeth in Biffy's bathroom. How dare we? 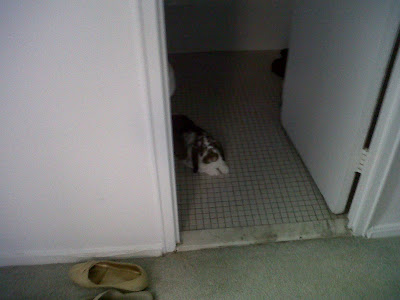 Another favorite perch of his is behind the toilet. When he got sick, he went behind the toilet and wouldn't come out. I eventually fished him out of there to get him into the carrier and take him to the vet. He also likes to explore the space under the cabinet under the sink, and dig in any clothes or towels left on the floor. 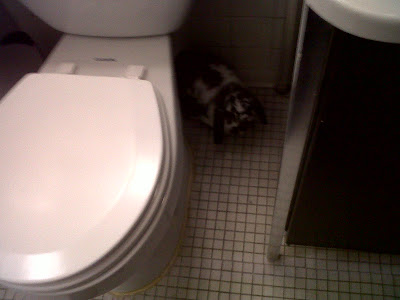 On Thursday morning, I was getting ready for work and the bathroom door was open. He went in, which of course is not unusual. He often likes to dig in the towel on the floor outside the shower. Suddenly, I saw him jump. My little explorer bun probably didn't know where he was jumping to. And I definitely don't think he knew it would be all wet in there, when I had just gotten out of the shower. 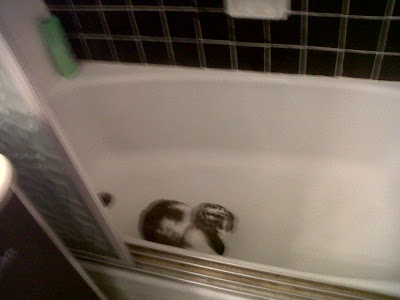 He tried to escape by jumping back out, the same way he got in, but he didn't realize that it was not only wet, but also slippery in there, and he flailed pathetically. 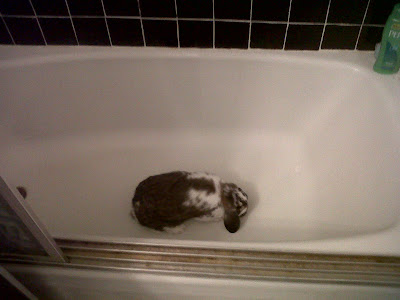 Biffy looks for an escape route.

Eventually, he realized he couldn't get out on his own, and stared at me beseechingly to get him out of there. I took pity and lifted him up and over the side of the tub, and gently placed him on the towel right outside the door of the tub.

Biff was so indignant at having gotten wet, being trapped, and then being picked up all in such a short time, he wouldn't even say goodbye to me when I had to leave for work. He sat outside the bathroom, grooming himself and licking his wounded pride.

Biff is still in love with the bathroom, and just this morning he boxed Jon's feet so hard he left distinct scratch marks because Jon dared to use the toilet.

Anyway, everyone have a wonderful New Year!!!
Posted by Lisa at 5:55 PM