Hey All!!!
We feel bad for not updating you sooner to let you know that we did just fine 4th of July weekend, being left alone. On the 4th, after Jon and I returned home, we were actually able to see lots of fireworks all across the horizon from our 17th floor apartment, and none were close enough to be loud enough to scare the buns.
The buns pretty much looked like this when we got back, not disturbed in the least: 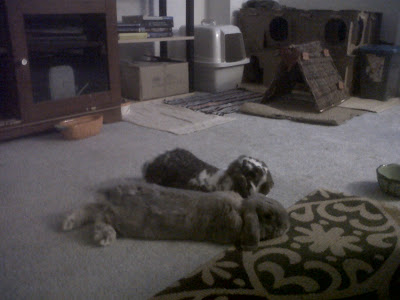 In other news, we replaced our litter boxes with a covered litter box. The idea was not so much to prevent digging, but a wishful thinking that the Sogna wouldn't be able to literally gut this one and empty it all over the floor like she was doing with the old one.
We were not so lucky. 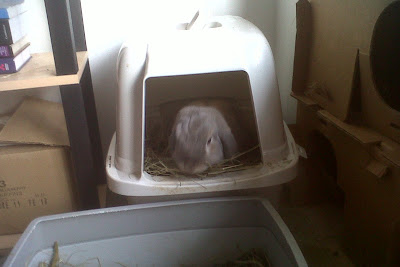 Jon got clever and decided to install an "overflow" box to catch the litter box contents that Sogna removes from the litter box proper.
Sogna digs in there too.
In fact, the mostly-empty box seems to have diverted most of Sogna's digging attentions. So actually, the new litter box is a relative success quite by accident. 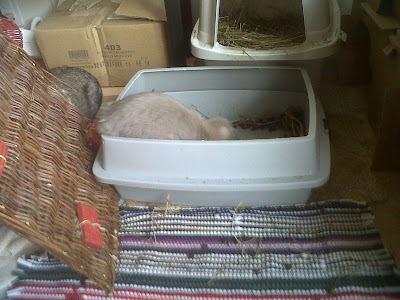 Biff prefers to observe digging activities from a safe distance. He knows by know what happens if he stands too close (litter box contents dumped on his head several times recently). 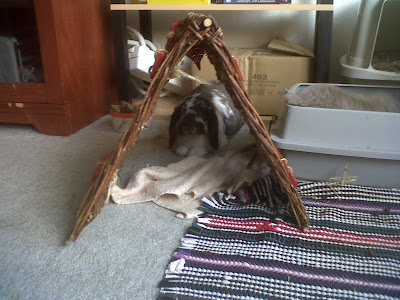 And by the way, the bunnies have shown me their opinion of celery, by not touching it whatsoever. 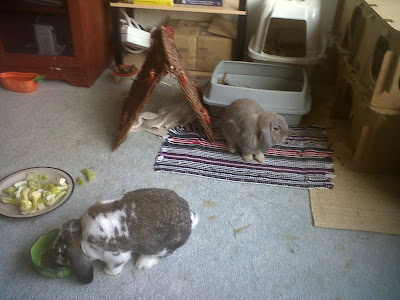 (The bowl from which Biffy IS eating contains our daily shared portion of 1/4 cup of Oxbow pellets).
We hope you have all been well and are enjoying your summer. Hopefully we'll be around more in the next few weeks. Only three weeks left of my internship! And only four until I go back to school :-/
Posted by Lisa at 7:05 PM