Updates, and Our New Friend Spike

The Sogna has been doing fabulously since "the scare," she ate her breakfast the next morning and has been fine since.

We were in almost exactly the same scenario with Biff on Tuesday, perhaps a bit more frightening: He refused to eat dinner, and seemed sick and uncomfortable until breakfast the next morning. Biff has also been fine ever since, if disgruntled about syringe feeding. 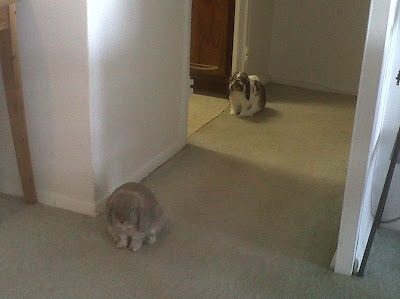 The Sogna continues her wild digging extra curriculars, and nothing we can do to change her setup seems to curb the damage. She is currently able to fling litter box contents approximately six feet which is actually quite impressive in my humble opinion. I have ordered a screen from BinkyBunny.com that sits directly on top of the litter (not raised in the box) and is supposed to stop her from digging and also make it easier to conserve litter. I worry about her history of sore hocks, though, so if I see any signs of irritation on her feet I will throw the screen out immediately. 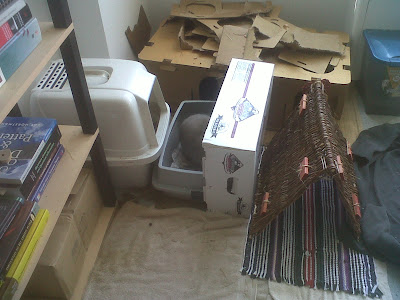 The cardboard box next to the overflow box is a new element I just added today. The litter box system just keeps evolving. But I doubt it will work. (Yes, I did dismantle the bottom level of the Maze Haven. It looked like an earthquake had hit it.)

Now for something completely unrelated. 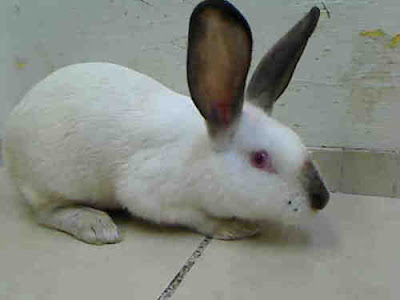 I read on the NYC Buns listserv that someone had posted to Craig's List that there were domestic rabbits all over a Queens park. I got in touch with one of the rabbit rescue volunteers who lives in Queens, and we decided to go on a trapping mission. She had gotten in touch with the original Craig's List poster and they went together on a Saturday, and had successfully trapped two Californians and discovered one body, in a matter of 30 minutes or so. (Two weeks ago it was very hot, so we suspect heat stroke). The next day, on a Sunday, she was in touch with park staff and they confirmed that there were still more buns in the park. So we went out there.

We found Spike more easily than I thought we would, as the park was thick with brush. We spent about an hour chasing him through the brush carrying x-pens in 90 degree heat. When Spike was ready, she just hopped into the open carrier of her own accord. While we were there a man and his young daughter came by with a Californian on a harness that they had said that they had caught quite easily in the same park. We tried educating him, but he didn't seem to want to hear it. We had thought that there had been another bun in the brush, but it was hard to tell whether it was the same rabbit since they were all Californians.

Spike had pretty severe mites, and an eye infection. Ticks are still being pulled off of her. I had wanted to bring her home to foster her, if only for the weekend, but Jon would have thrown me out of the house if I brought home another bunny. But she is being well taken care of at the shelter. In our last update from the park staff, we were told that there were no more rabbits spotted except one more body.

So, grand totals: Three buns taken to the rescue. One caught by the man and the little girl. Two succumbed to heat stroke. All Californians, all of adult size, all quite tame. None spotted before a couple weeks ago. What other conclusion can be drawn except someone dumped six helpless, domestic rabbits in the park?? Pretty disturbing, but at least four of them survived. Send your bunnies a hug on behalf of these poor little guys.

Back to school on Monday. Dreading it with all my heart.

Hope everyone and everybun is well and comfortable and beating the heat.
Posted by Lisa at 11:43 AM